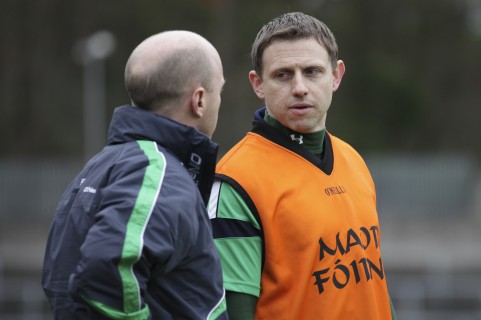 Fermanagh trainer Kieran Donnelly is positive that the players will show the right response between now and the championship encounter with Down following last Saturday’s disappointing defeat to Wicklow in the Division Four final at Croke Park.

Fermanagh had entered the league decider on the back of an unbeaten league campaign but Donnelly acknowledged that Saturday showed there is plenty more work to do be done ahead of the meeting with the Mournemen.

“In fairness, this group of players have worked very hard to date and they know we have more work to do. I have no doubt that the players will respond in the right way. They know that it is a work in progress and that we are constantly trying to get better, and I suppose Saturday proved that we have things to work on. I’m positive that the players have the right attitude to knuckle down and push on for the championship. We realise we have to work hard to achieve the goals that we had set out for ourselves at the start of the year,” he commented.

Fermanagh looked in all sorts of trouble at one stage in the first half against Wicklow before clawing their way back into contention before the break. However, Donnelly admits that they failed to build on that in the second half.

“We had gone there to win the game so it was disappointing to have lost. We had worked so hard to get back into the game after we looked dead and buried at one stage in the first half but we just didn’t push on from that in the second half which was disappointing,” he said.

However, he felt that the spell of football they produced in the first half that saw them trim the deficit from nine points to the minimum was one of the plus points to take out of the game.

“There were periods of that play which were excellent. I thought we looked very slick and we moved the ball very fast. That was very pleasing, not just in the football we played but in the character we showed. We didn’t give up and we got the scores at the right time and again that was pleasing. That’s one thing we can take a positive from, that when we moved the ball well and at pace we cut Wicklow open.”

The second half though was a different story. Fermanagh looked well placed going into the second period, trailing by only two points but with the wind at their backs they never got going at all with the long ball into the full forward line not working on the day.

“There is an element when you are playing with the breeze, you try to force passes that aren’t on and hopefully our decision making will improve over the next couple of weeks. Wicklow made us pay. They hit us on the break and the game gradually got away from us.”

Donnelly was gracious in defeat and full of praise for the Garden County.

“That’s one thing we were always aware of, they are a good team. Yes, we did contain them well at Brewster Park but they have four quality forwards that any team would like. I think they will go on and do well in the Leinster Championship.”

So, the focus now switches to the championship for Fermanagh and Donnelly’s hoping that they can get all their injuries cleared up and have a full hand to prepare for the Mournemen.

“Any squad wants to stay injury free. It increases the competition for places, and the more quality players you have out on the training pitch, it leads to a more intense session as well so we would hope to have every player available and fighting for places come the 3rd of June,” he concluded.

This article appeared in Impartial Reporter 03 May 12