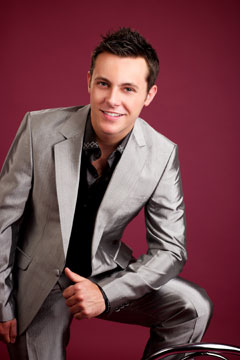 Whether it is boxing or bingo, or maybe country music is your thing, then Brewster Park is the place to be at the end of November.

Fermanagh GAA senior football team will host a fundraising weekend from Friday November 23 to November 25 at Brewster Park – and it will include a bit of something for everyone.

‘The Brawl In Brewster’ will begin on the Friday night with country singing sensation Nathan Carter taking the stage, and this will be followed by a white collar boxing event on the Saturday night when a host of Peter Canavan’s senior squad, as well as a number of guests will be swapping football boots for boxing gloves.

And the weekend will conclude on the Sunday with a monster bingo session, the whole weekend’s activities to take place in a large, state of the art, marquee at the Enniskillen venue.

“There are areas where we would like to do more to enhance the team in terms of preparations but we are very aware that in the current climate county boards are under a lot of pressure in terms of finance. So we thought that we would step up to the plate and do something to help,” he said.

Treacy states that the players and management have bought fully into the idea and they are determined that the weekend will be a huge success.

“We’ll work hard at it to make sure that it is a success. Everybody is fully behind the idea and the boys have put in a lot of work already in planning and organising for the event while others are also working hard to get ready for the boxing. We will be going out looking for sponsorship from local businesses and individuals while we would like to thank Patsy Tracey who is the main sponsor of the event.”

Nathan Carter will provide the entertainment on the Friday night and Treacy is also hopeful that the bingo will be popular event on the Sunday afternoon.

“We tried very hard to get Nathan Carter on board and he and his manager John Farry were very receptive to the idea and came to the launch on Saturday. Nathan would have a big following within the GAA and beyond and we feel he will be popular while there is also a lot of bingo enthusiasts in the county and hopefully they will all come along on the Sunday for the Monster Bingo.”

The main event of the weekend though will be the boxing and this is guaranteed to attract a large crowd as the likes of Shane McCabe, Marty McGrath, Niall Bogue and Ryan Jones take to the ring. And they will be joined by former county stars Raymie Gallagher and Tom Brewster, Tyrone senior star Peter Harte as well as county PRO Johnny McManus and ‘This Is Our Year’ author, and Belfast Telegraph GAA Editor, Declan Bogue for what is sure to be a great night’s entertainment.